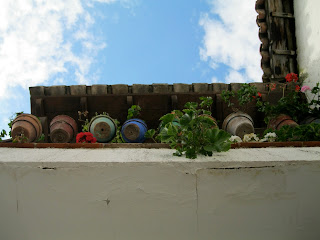 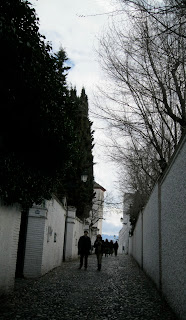 Woo! I’m here and alive, I promise. Midterms made me fall off the map for a little bit there, but I’m back to being a regular study abroad student now… which means the studying part has returned to it’s special place called “the back burner”. Well where do I start? I guess with Morocco…. 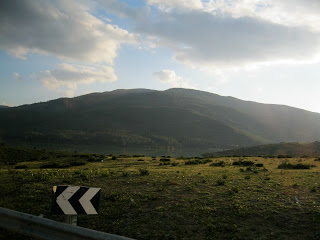 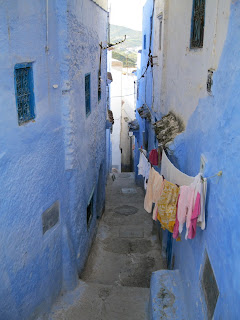 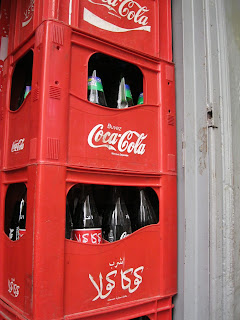 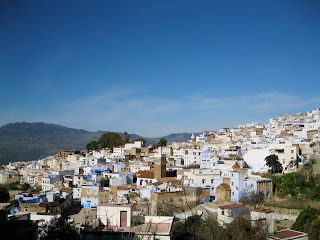 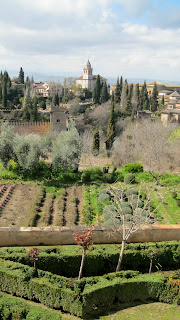 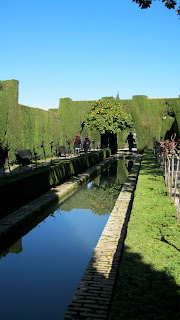 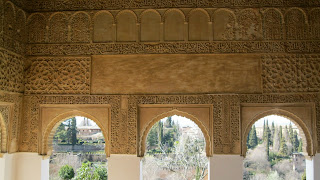 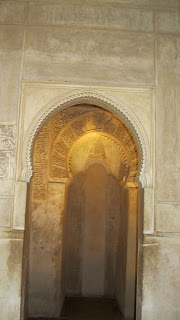 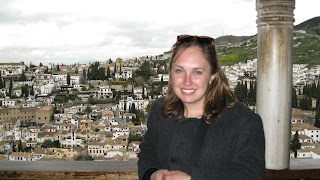 This week was a busy one. I start TEACHING (not just observing!) my Spanish 4th and 5th grade classes NEXT week, which is pretty exciting, but I am a tiny bit nervous! I have had some trouble with communication between my Education class here and the actual school classes. To sum it up in the most kind way via the worldwide web: After seeing how teachers show up 30 minutes late to a 45 minute class, yell at students in front of everyone when they have not done a workbook activity, how professors seem to believe that once they are a professor they know all and do not need to listen to anything their students have to say and can interrupt them at any point and ignore their questions (sorry the kindness monitor fell off there) and how when teachers receive promotions to administrative positions they think they know all and can yell at their co-workers, I have realized how thankful I am to have gone to school in the United States and plan on teaching in the United States. I know some of these things happen in the USA, too, but let me tell you; it’s to a new level over here.
My homestay gets better everyday, but my stomach is still not sure how to handle all of this fried food. I’m not sure what exactly the problem is, or what to do about it, for that matter, but I’m hoping it just goes away… I sound a little too much like my grandpa (he also wasn’t a huge doctor fan) when I say that, but I just can’t imagine going to the doctor here and trying to explain “After I eat sometimes, well, only on days after I workout (which I no longer do) my back hurts, and then when I don’t work out, (which I now never do) my stomach hurts on the left-hand side right under my ribs, but it feels like I am being tickled, but only off-and-on, but the back part was just a terrible pressure”. No gracias-- I’ll take my chances. Oh, also, for all of you who were around for when I couldn’t hear out of my left ear for a solid two weeks last year during midterms—it’s back! (read in that creepy sing-song voice people sometimes use with children) Luckily, I still have some prednisone from the last time it happened and have been taking those, but I just ran out so we shall see. It has worked to my advantage in the morning, though. When Manola turns on the TV every morning at exactly 8:30 am and I do not feel like waking, I just roll over so that my bad ear is not on the pillow and then everything is just muffled and I can sleep in! We’ll see how this goes for my history class at 9 a.m…. hopefully the alarm doesn’t get muffled, too.

I come home in exactly two months from today, and I am excited. I realize I am going to really miss speaking Spanish whenever I want to (something that generally gets odd looks when I do it in the States), traveling, the people I’ve met here, and sitting at little cafes in the Sevillan streets in 70 degree weather. But I will be so happy to watch baseball, take long showers, sleep in, look people in the eye on the street without being considered… well… easy, listen to the radio, hear the Pledge of Allegiance, see men who are NOT wearing scarves ALL OF THE TIME, go for runs without being looked at as if I have grown a tail (I wouldn’t be surprised if I had after all of these body issues), and a whole lot of other stuff. The number one thing I’m excited for is up in the air—either to see all of my family and friends or to eat Kraft Macaroni and Cheese and salsa. But that one is a tough call.
Thanks for enduring this. I’ll be home in exactly two months. Odd, I know, but I figured I’d give you a heads-up since the party in Colorado will soon be ending due to the return of the wicked witch of the north (me). And for all of you españoles who have been reading (which means all of the white kids in my program from Chicago), the party will be ending shortly because you will no longer get to hear about my bodily functions due to eating weird fish. Pity, I know.
Well until next time. Oh! Start looking forward to: Barcelona, VENICE!, Prague, Amsterdam, and a visit from Rick, Gretchen, and Junior Chubs (aka my family). It should be good.
¡Ha’ta luego! ¡Adio’! and in the words of Manola: ¡TEN CUIDADO! ( (BE CAREFUL) don’t worry Mom, she tells me it everytime I leave the house, just like you tell me to “be aware of my surroundings”… I can’t escape!)
Posted by lowreyp at 7:29 PM 1 comment:

Way up North where the air's STILL WARM...!

Everyone warned us that A Coruña, a small city on the Northern coast of Spain, was going to be cold but that didn’t stop Eve, Lauren, and me from taking the risk! However, upon arrival Friday morning, the foggy, cold air left us all a little skeptical upon exiting the A Coruña airport. LUCKILY, after putting our bags down at the hostel (which smelled funny but had wonderful mattresses) it warmed up significantly, and we were able to sit in the sun, drink coffee, eat croissants, and play cards. That sentence pretty much defined our time in A Coruña… we drank a lot of coffee, ate a lot of pastries, and managed to get up to 2,000 points on the Gin Rummy scorecard. When we weren’t doing these things, though… 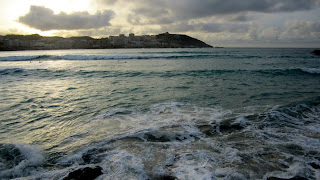 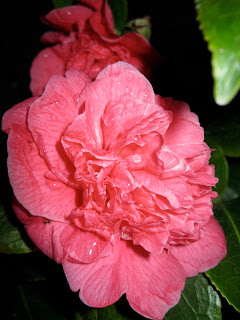 The first day, after our tummies felt satisfied, we explored a little bit. We realized A Coruña is much smaller than Seville when we managed to get from one end of the map to the other in less than a half hour. In that time, we stumbled upon a cool looking building that we decided to go into—why not? After passing a few rooms with chalkboards, we realized it was a school. We REALLY realized this when a short man in a sweater started yelling at us. We were about to scurry out of there, when he told us to stop and wait. Uh oh. He went into a little office and came back out with a key, which he used to open the door of --- the torture chamber. Not really, (I’m reading too much of The Princess Bride, sorry) it opened an auditorium with a huge ornately decorated ceiling and some statues of fancy people. Another teacher with glasses, a sweater vest, and no hair on the top of his head came into the room and asked what was going on. After an explanation from the first short-sweatered guy, he asked to see our map. We handed it over and he proceeded to mark which clubs and bars we should go to. His little bald head bobbled over the map, telling us to “start here around 8:30 and then go here and then around 2 this club will be great!” Did I mention he was about 50 years old and teaches microeconomics? Only in Spain. We giggled the whole way home. 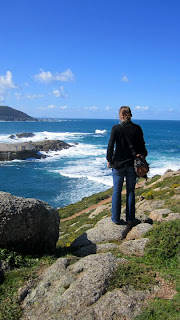 When I say “home”, I mean the grocery store. We spent the majority of our visit there. We stocked up on bread, cheese, apples, carrots, peanuts, yogurt, and three boxes of Special K (which we ate in total due to the Authentic Chocolate that is unheard of in the US). The last morning when we could no longer stay in the hostel, we took our yogurts and Special K outside to a street corner to eat breakfast. We looked a little bit like homeless people who had splurged on the cereal brand, but we managed to have at least 10 people tell us “buen proveche” which means “Bon Apetit!” Even a passing policeman, who we feared was going to tell us to not loiter on a corner, wished us a good breakfast!
A Coruña isn’t a huge tourist city, which gave it a friendly, peaceful feeling. Also, I think we were the only non-Spaniards we saw (one lady asked if we were French--score!) which was pretty cool. Everyone was really helpful and smiled when eye-contact was made (unheard of in Andalucia!), and it was interesting to hear how much slower the people of Northern Spain speak than those in Andalucia. We did manage to do a little cite-seeing—we walked along the beach, found some cool-looking buildings (that I still can’t tell you the names of… I guess that’s not my strong point on this whole world-traveler thing….), saw the oldest working lighthouse in Europe (El torre de Hercules), saw an old prison, ATE MEXICAN FOOD (still haven’t had salsa… Chad, you know how that’s torturing me!), and went to the cemetery. And I think I’ve mentioned the cards, coffee, and pastries, but if I hadn’t, just know that those were definitely thrown in there on more than one occasion…. 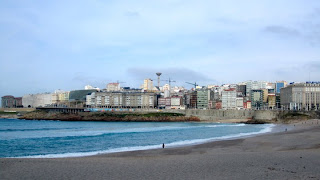 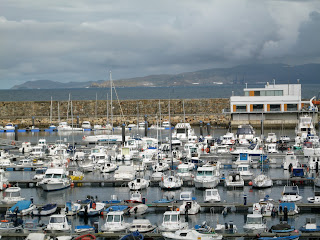 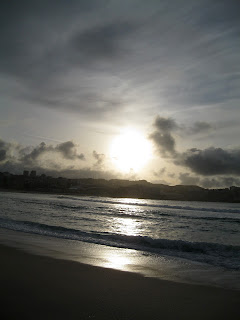 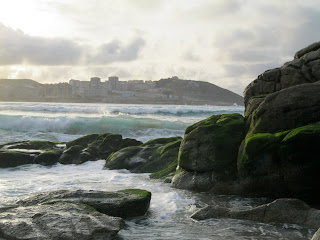 Well, I think that's enough conversation about my predicted weight-gain. Next weekend I’m headed in the opposite direction of the world to step foot on my 3rd continent— I’m off to Morocco! I have a feeling this will involve even more sun, and hopefully, for my heart’s sake, less pastries, but until then… “que todo pase bien!”
P.S. Lots of photo credit to Eve Kaiser. This blog is becoming her's slowly but surely....

Spanish Vocabulario (the things 13 years of Spanish never taught me...)